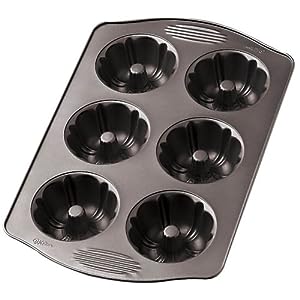 I entered the Statoil Baking Contest last year, and was confident that I would win.  If you know anything about me, you know that I tend to throw myself into whatever I'm doing and give it my all.  I also don't lose... at least not very well.
My plan was to make mini triple chocolate bundt cakes with chocolate ganache icing.  For the occasion, I went out and bought a mini bundt pan similar to the one on the left.  I baked the cakes a few days in advance, since they tend to taste better and are richer and more moist and dense after sitting for a few days.  Just a few minutes before the competition was to start, I drizzled them with the ganache, sprinkled them with a light dusting of icing sugar, and garnished them with Ovation sticks.
Unfortunately I didn't think to take a good picture of them, but a coworker took one with her phone:

When I arrived at the contest location, I eyed up my competition and felt confident that mine would taste the best and look the nicest.  The judges did their judging based on presentation and taste, and then announced the results.  I was shocked when they announced that I had placed second.  Second?!?  WHAT?!?  I went in to the contest fully expecting to easily receive first and I got second.  I'm a very competitive person and I wear my emotions on my sleeve, so it took all I had to pretend be happy for the winner and not let it show how disappointed I was.  The fellow who organized the contest was the one who ended up winning, and I figure he must have bribed the judges or something.  At least that's the story I'm sticking to....
So, needless to say, my immense failure last year has made me even more intent on winning this year.  I need to go above and beyond what I did last year and make something truly spectacular.  I've already started to develop some ideas in my head and have done a bit of looking around for supplies and inspiration.
Without giving too much away, I was thinking along the lines of something like this: