Lowen and I decided on what we were going to be for Halloween way back at the end of August, but then didn't actually start working on our costumes until October 28th.
Here's our inspiration:

Here's the story of how our costumes came together.  We started out by collecting boxes from Costco.  Just another reason why I love Costco! 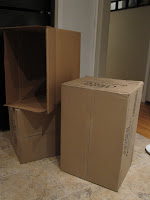 On Thursday night we went to Walmart to see what kind of things we could find for the little knobbies on the blocks.  We ended up deciding on Gladware containers.  They weren't exactly the right shape, but they were the best size for what we needed.  We also bought some tiny cups to use for Cleo's costume.  She wasn't invited to any parties, but still wanted a costume so she could feel like a part of the family.  Anyway, back to Walmart..... We bought some spray paint as well in our desired colors (Lowen - Red, Esther - Green) as well as some contact cement.  The rest of the evening was spent cutting holes into the boxes and gluing on the knobbies.

Friday afternoon and evening was spent putting a couple coats of spray paint on them.  Lowen was kind enough to do all the painting; spray paint scares me.  We had to put several coats on them because the paint we bought was cheap and the boxes soaked it up.  I even had to make another run to Walmart to buy another can of each color. 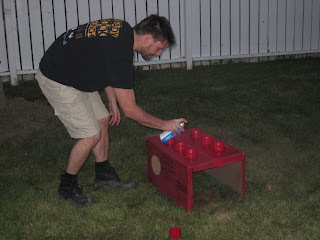 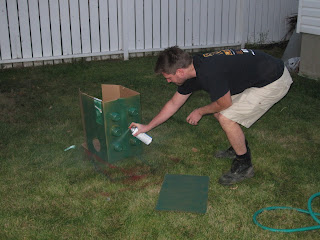 Lowen's fingers hurt for a few days after all that spray painting.  :(

We got to wear them to 2 parties, and they were a huge hit at both parties!  They were a lot of fun to make and to wear! 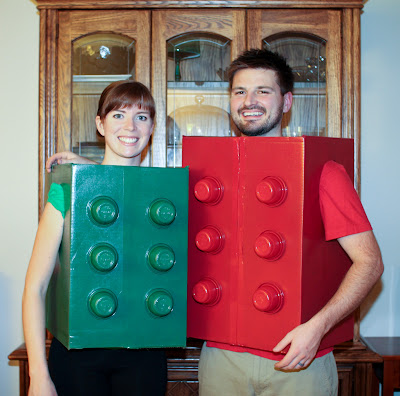 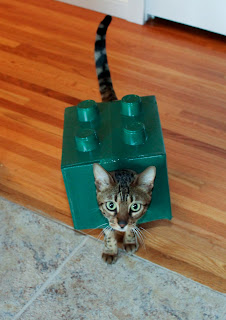 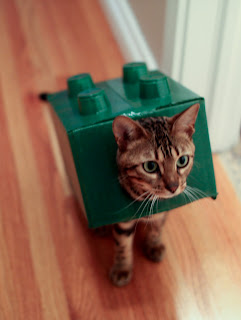 Not only were they stylish and comfortable, but they were practical as well.  They doubled as a handy drink/food table so I didn't have to always have my hands full. 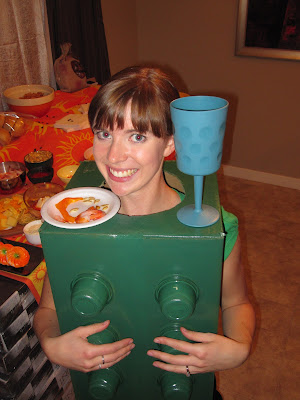