Long ago I decided to join the Kaleidoscope Quilt Along  with Don't Call Me Betsy.  I was quite excited about this project and decided to do a black, white and red quilt.  I quickly began cutting the patterned pieces, which seemed to take FOREVER.  I had 6 patterned black/white fabrics, and 6 patterned red pieces.  I needed 120 of each triangle, so I began cutting 20 of each fabric.  Once I finished those, I realized that I had accidentally cut double the amount I needed.  Apparently 6 x 2 x 20 does not equal 120. Nope nope nope.
I figured that I'd just make 2 quilts; one with black and white triangles with red corners, and one with red triangles and black and white corners.  I had a solid red fabric that I was going to use that matched ok.  It was a little darker and a little more cranberry-er than I wanted, but it was what I had on hand, and I've made a vow to buy as little brand new fabric as possible. (I prefer the thrill of finding fabrics at thrift shops)  Because I have crafting ADD (in addition to mild OCD and ADOS [do you know of that one?  Attention Deficit... Oh Shiny!!]) I decided to sew the triangles as I cut them.  Big mistake.  I got about half way through sewing the blocks together when I realized that I had run out of solid red.  I took a swatch to Fabricland (*shudder*) and couldn't find anything that matched.  What to do, what to do!  I thought I could use black and then alternate the blocks, but was worried that would take away from the pattern.  My mom then told me she had a whole ton of red fabric and gave that to me.  I wish I had thought of that sooner; it was the perfect shade of red, and there was more than enough of it!!  Oh well.
I decided then to just make a small, square quilt and add some other fabric to the top and bottom to make it into a lap size quilt.  Here it is in all its glory: 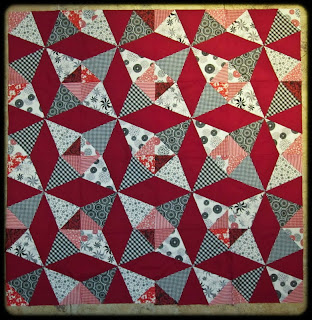 The photo is a little awkward; my kitchen light is directly above the top right corner of the quilt so the red looks a little different there.  But it's all the same red.
It doesn't look too bad, eh?  Well, from far away it looks fine.  Close up you can see how uneven it is and how very few of the points and seams line up: 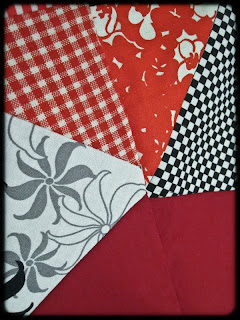 So, since nothing has gone right with this quilt, I've decided to call it a Wonky Kaleidoscope Quilt.  That'll work, won't it?  Let's just say I meant to make it a funny, small size where the reds don't match and the seams are waaaaay off.  Putting 'wonky' in front of something will fix any mistake! 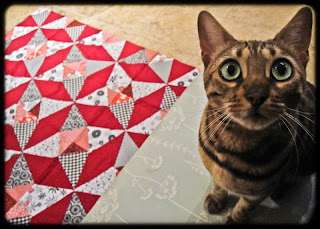 Cleo agrees.
Posted by Esther at 8:00 AM